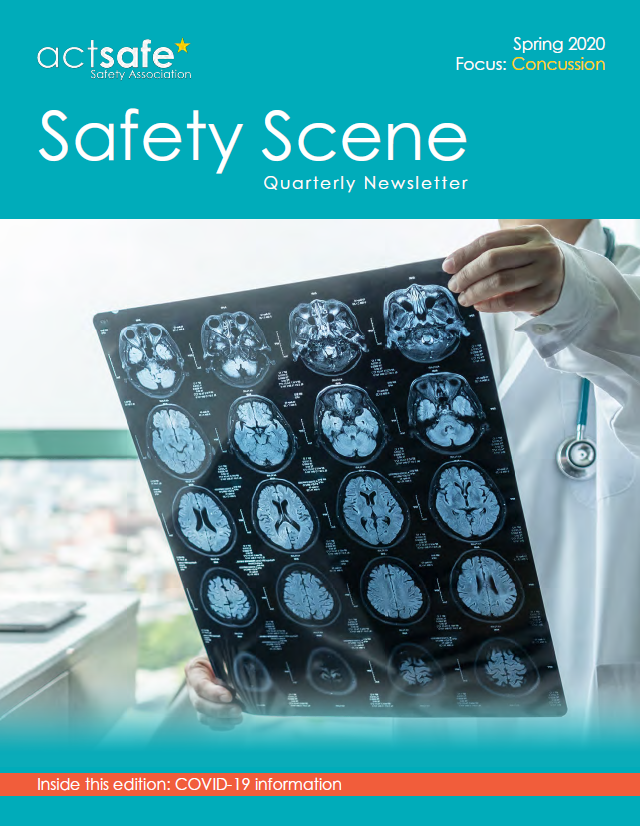 On Feb 9th, 2019 while skiing, I suffered a concussion. I have no memory of the fall that day and ‘lost’ 30-40 minutes in total. As I know the correct concussion protocol, I visited an emergency room later that day where the medical team carried out a CT scan, an x-ray, blood work, and an ECG. There was no indication of a serious problem discovered. I followed up with visits to my own doctor 3 follow up visits to a concussion clinic before March 9th.

– Tom Adair, Actsafe’s Board of Director, shares his personal story on dealing with a concussion

As all tests came back clear and with medical approval, we decided to continue our plans to go on a beach vacation to Mexico on March 9th. Beginning around 5 days in, I began to feel unwell. The local doctor initially thought it was heat stroke. My symptoms worsened over a few days with headaches, confusion, and difficulty walking progressed to not being able to. I left the island of Isla Mujeres for Cancun on a gurney on the evening of March 17th. At the Cancun hospital, they initially thought that I had a stroke. Further tests concluded that I suffered a bilateral subdural hematoma. I was operated on the next afternoon to drain the accumulating blood in my skull.

My bilateral subdural hematoma was the result of veins located beneath my skull rupturing and starting to bleed. The tears cause bleeding in the subdural layer of tissue. Symptoms may not appear for several days or even weeks. The blood then collects between the brain and the skull exterior to the dura, which is like a thick plastic bag around the brain. As this space filled with blood, the increasing pressure caused the symptoms of subdural hematoma which I had experienced.

My understanding is that the mortality of acute SDH is in the range of 36-79%. Many survivors do not regain previous levels of functioning, especially after an acute SDH severe enough to necessitate surgical drainage. Favourable outcome rates after acute SDH range from 14% to 40%. I beat those odds initially with a successful surgical drainage.

Unfortunately, this wasn’t the end. A week later on March 24th I vomited violently and started shivering uncontrollably due to a secondary infection I likely picked up while in the ICU after the initial surgery. I was subject to sepsis due to a gram-positive bacterial infection. Patients with sepsis with no ongoing sign of organ failure at the time of diagnosis, such as applied to me, have about a 15%-30% chance of death. Elderly, having the highest mortality rates. At 64, I like to think I am not elderly and I am also in good health overall and take no medications.

As an added wrinkle, there was some still some old blood in my skull which was not removed initially due to the risk and it was left to be reabsorbed over time. This was no longer an option. A 2nd subdural hematoma operation was scheduled to remove this protein source, because the gram-positive bacterial infection of my blood would find it. The outcome would be bacterial meningitis. Bacterial forms of meningitis can be extremely dangerous and fast-moving and have the greatest potential for being fatal.

They basically washed my brain with a second subdural hematoma surgery by flushing out the old blood and my doctors did their best to remove any active bacterial sites they could. A week on IV antibiotics brought the infection under control.

I was extremely lucky as I had one of the best neurosurgeons in the world performing this delicate work and now have three, one inch access holes on my skull along with four small straw size drain holes. Lucky seven.

Feeling like I had won the lottery, I returned to Canada on April 5th after 20 days in the Cancun hospital.

This article was written for our quarterly newsletter, Safety Scene. You can find a link to the full edition below.

Click here for the full Spring 2020 Edition of Safety Scene